“NIMBYs are not necessarily the problem. They are behaving normally for humans. The problem is politicians and other decision-makers who know better, who don’t do the right thing because of NIMBY fear. If you’ve had a long process, heard from thousands of people, investigated and understood the technical issues, know your aspirations as a city, and you let 10 or 15 individuals at the last minute show up at council and turn it down? I don’t blame those 15 individuals, I blame the leaders.”

Urbanist Brent Toderian on how to deal with NIMBY [Not In My Backyard].

By David Roberts@drvoxdavid@vox.com  Updated May 5, 2018

Urban density, done well, has all kinds of benefits. On average, people who live in dense, walkable areas tend to be physically healthier, happier, and more productive. Local governments pay less in infrastructure costs to support urbanites than they to support suburbanites. Per-capita energy consumption is lower in dense areas, which is good for air pollution and climate change.

Plus, dense, walkable areas tend to be buzzy and culturally vibrant. There’s a reason they are often so expensive to live in — lots of people want to live there. Demand exceeds supply.

But creating a dense, walkable area almost always means increasing the density of a built environment that already exists. Especially in developed countries, they’re not building a lot of new cities. They’re working with existing ones. And cities built after the advent of the automobile were generally built around cars, which generally means low density.

Densifying can mean up-zoning to allow greater height in existing urbanized areas, or to allow duplexes, triplexes, or apartments in previously single-family areas. It can mean allowing for mother-in-law units (“accessory dwelling units,” or ADUs, in the lingo) or units along back lanes and alleys. It can mean extending transit to new areas.

But one way or another it means change. It means telling the residents of an area that a bunch more people are moving in. And that always generates resistance, sentiment that has taken on the name NIMBY [Not In My Backyard].

I asked urbanist Brent Toderian, who has worked with numerous cities on densification projects, how he thinks about, and deals with, NIMBYs in 2017. (More of our conversation here.)

My hometown of Seattle is full of purportedly progressive people who enjoy urban amenities like everyone else, but if you ask them to up-zone, it’s a revolution. Talk a little about NIMBYs.

I work all over the world, and there are NIMBYs everywhere. Density is never easy. Change is never easy. We have a bias towards the status quo and we tend to weigh loss more heavily than gain. That is human nature.

So I don’t begrudge NIMBYs. I value them. I listen carefully and I learn what they’re afraid of, why they say no. Often I will learn how to do yes better and address their fears, or at least mitigate them.

NIMBYs are not necessarily the problem. They are behaving normally for humans. The problem is politicians and other decision-makers who know better, who don’t do the right thing because of NIMBY fear. If you’ve had a long process, heard from thousands of people, investigated and understood the technical issues, know your aspirations as a city, and you let 10 or 15 individuals at the last minute show up at council and turn it down? I don’t blame those 15 individuals, I blame the leaders.

I think we need to train our politicians on how to work with the NIMBY mindset and do the right thing in its context. Doing a “yes,” but a better yes, educated by NIMBY fear.

How can public officials get better at that?

If you think NIMBYs are hard, it’s astronomically worse when the NIMBYs are right. So you should do everything you can to avoid helping the NIMBYs be right.

I’ll often point to existing buildings and say, “If I thought that’s what I was going to get as a community, I’d be against it too.” The city has to be able to virtually guarantee the quality of the outcome from the urban design, livability, multimodal perspective. And a lot of cities have not set up the culture, the structure, the capacity, the training, or the tools to deliver quality. So when NIMBYs express a fear of change over density, they’re often right.

Don’t let them be right, is what I’m saying. Vancouver has a track record of delivering density in a pretty good way, so we can have a different conversation about change and density and height.

How do you make density something that communities welcome?

I don’t support stupid density. I sometimes have as much concern about the YIMBY [Yes In My Backyard] movement as I do about the NIMBY movement. I don’t buy an absolute not-in-my-backyard, but I also don’t buy the argument that we should get rid of our zoning codes and have at it, build as much as we can. Both of those are the extreme.

The conversation needs to be around quality city-making, so I talk about QIMBY — not the Mayor of Springfield on the Simpsons, but quality in my backyard.

One, it has to be of a very high design quality. I don’t just mean aesthetics, although that can be part of it, but it’s about profound relationships being addressed through smart design.

The third piece is amenities and a diversity of housing types, to make density not just compact, but livable and lovable. It’s the difference between cramming people in and creating great neighborhoods. So, amenities such as parks and green spaces, public and people places, heritage preservation and integration, community and cultural facilities, civic facilities, even things like incubator space for artists. Amenities are the things that give communities heart and vibrancy. It also includes housing diversity: rental housing and public housing.

Unless you are planning in a magical city where you have infinite resources — and I haven’t seen that city yet — you are struggling to pay for those kinds of amenities, or achieve that kind of housing diversity. In many cases, you can’t mandate it from developers, because that’s beyond your power. So tools like density bonusing are critically important to delivering that piece of the puzzle.

You have a base density, but [a developer] can increase to a higher density by negotiating amenities that make that higher density more livable. The key is to make sure that you’re spending the value on things that make density successful.

I help cities set up these systems all over the world. It makes the conversation about density with developers different. It gives them a higher level of certainty within the political process, which they like. 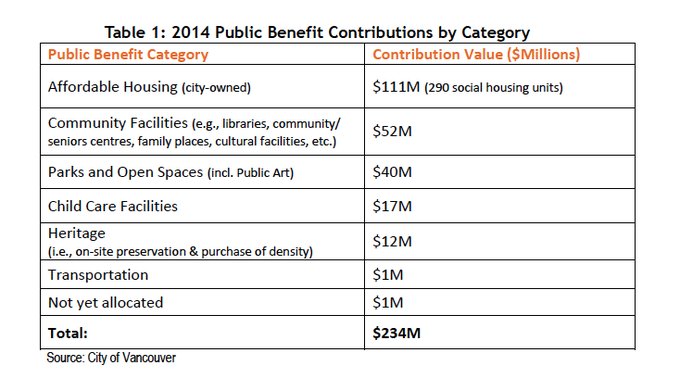 Vancouver has the most robust density bonusing system in the world. It’s not even close. And it’s one of the keys to our livability. It’s entirely changed the politics.

It is somewhere between a disappointment and travesty that cities are creating massive amounts of value through municipal decisions around density without leveraging some of that value to pay for the things that cities are struggling to afford, the amenities that make density livable and lovable.

You’ve said that it’s often harder for cities to stop doing the wrong thing than it is to start doing some of the right thing. Is that because of established constituencies?

Yes. Because there are angry people who will yell at you. You need the will to stand up to that. When I work with cities, a lot of my time is spent preparing them for the storm.

I’ve sat in the municipal chair; I’ve felt the storm directly. I’ve had development agencies try to get me fired for taking firm positions. My job in Calgary was almost literally to turn things around, and you never do that without making many people upset.

This is going to sound overly simplistic, but the truth is, it often starts with a better city-wide conversation. In Vancouver, you can’t swing a stick without hitting an event talking about cities. Its constant, it’s unrelenting. It wasn’t always that way, but it’s certainly that way now.

There’s other cities I work in where the conversation is non-existent (Oxnard, ed), so when you try to introduce a new policy, a new strategy, or an unusual development that doesn’t match the status quo, it’s very easy for all hell to break loose.

Having a broad conversation about city-making doesn’t mean those individual conversations are miraculously easy, but they are different, because you can draft behind a broader conversation with broader participants, who aren’t just against things but are also for things.

A lot of my work with cities and even state-level governments is about changing the larger conversation so that all the smaller conversations aren’t so angry and bloody.

What are some quick wins that can help build public support?

You can support catalyst projects [one-off demonstration projects], but ultimately, it’s going to be about the quality of your results. One of the best ways to improve the conversation about development is to make sure there’s better development. If you don’t like NIMBYs, don’t make them right.

By RICHARD D. KAHLENBERGAUG. 3, 2017  CreditGolden Cosmos ONE hundred years ago, in a major advance for human dignity, the Supreme Court struck down a racial zoning law in Louisville, Ky., that prohibited nonwhites from moving into homes in majority-white areas. Laws like these, which existed in numerous cities at the time, are part of…

Side Hustle House. Source: Union Studio The Swiss Army Knife “Side Hustle” House The Side Hustle House has been designed to supplement primary income and evolve as household needs change. ROBERT STEUTEVILLE    APR. 24, 2018 Note: Missing middle housing will be a topic at many sessions in CNU 26.Savannah, May 15-19. High housing costs and lack of…

A new study identifies the precise ways that stricter land use regulations lead to greater divides. kropic1 / Shutterstock.com   We’ve long known two things about land use regulations. One is that elements of them—in the form of large lot requirements and other aspects of “exclusionary zoning”—have led to the racial and economic segregation. The…