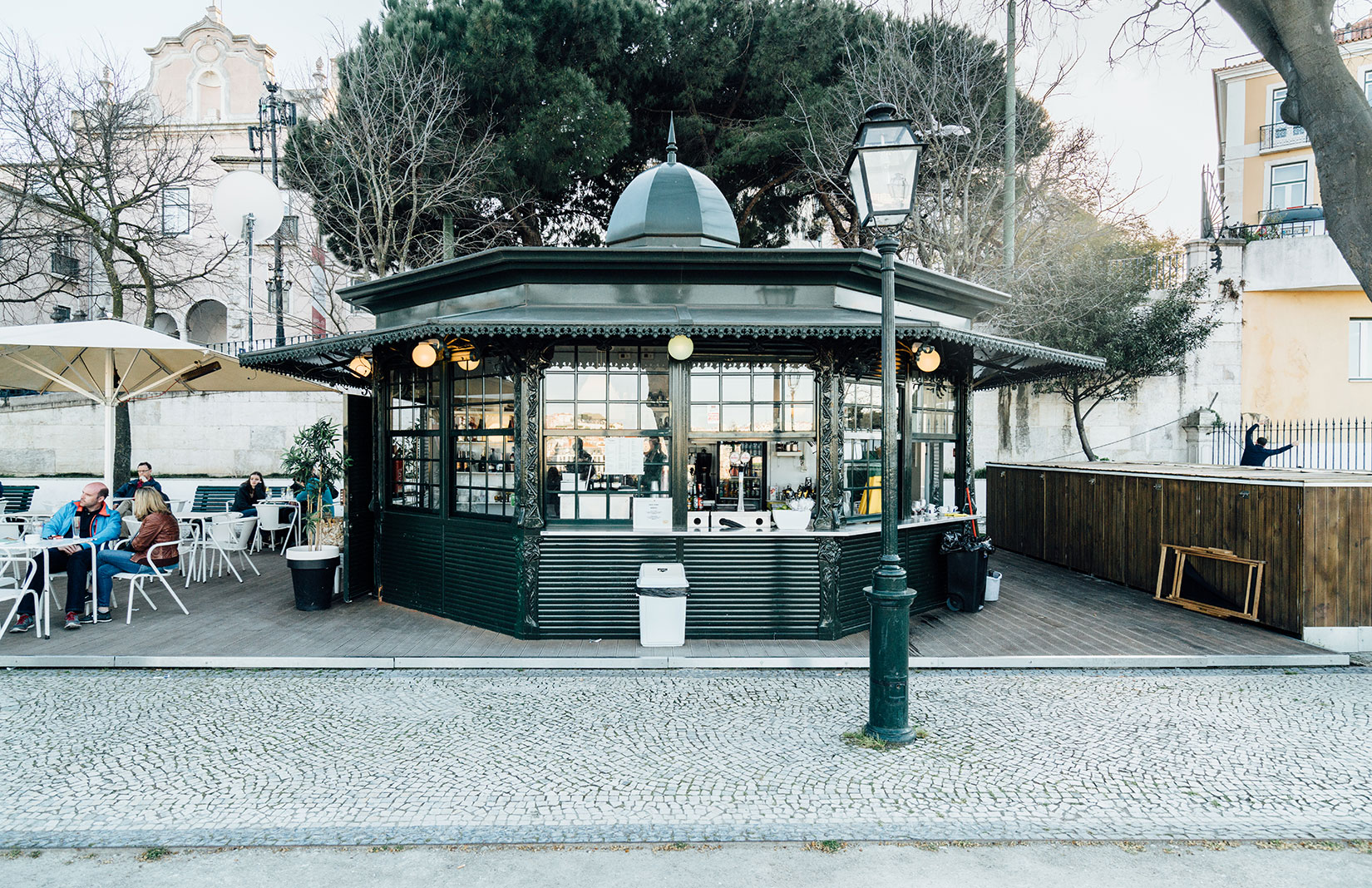 Once obsolete, these staples of city life are making a comeback

Until just a few years ago, a ‘capilé’ would have been as unfamiliar to Lisbonites as to those outside of Portugal. Once a staple local tipple, made from maidenhair fern leaf syrup and essence of orange blossom, it slipped out of people’s consciousness as the city’s classic drinking and snacking spots – its historic kiosks – closed for business.

In 2009, however, local businesswoman Catarina Portas teamed up with architect João Regal to restore the kiosks in five downtown areas. Their ‘Quiosque de Refresco’ quickly prompted a wave of revival acts across the city, putting capilé and other classic beverages back on the menu.

Kiosks and their singular architecture – a mixture of oriental and art nouveau styles – play an essential role in the capital city’s animated street life, but Portas’ restored structures stand out. ‘I like taking something that’s semi-forgotten and understand how one could adapt it to today’s times in an interesting way, preserving its original qualities,’ she explains.

British photographer Richard John Seymour toured the city to capture its myriad of kiosks. ‘They are beautiful fragments of Lisbon’s street life and urban heritage,’ he says. ‘Their re-introduction into the city feels like Lisbon celebrating and nurturing its commitment to the public realm. The kiosks create new neighbourhood centres and give Lisbonites a new opportunity to enjoy their city together.’

Some of the restored wrought iron kiosks have been in the same spot for decades, while others are replicas, created using original designs.

A concept originally imported from Paris, the small pavilion-like structures date back to the 19th century, when they occupied squares, city gardens, important tram and bus intersections, and pedestrian avenues. They were places where people stopped on their way elsewhere, to momentarily quench their thirst and hunger, talk about their day, and buy lottery tickets, tobacco, and newspapers. In addition – according to the first kiosk planning application in 1867 – the structure’s duty was to ‘beautify the street’.

Kiosks rapidly spread throughout the city and wider Portugal, before falling into disrepair. Now, thanks to Portas and other enterprising Lisbonites, they are back in full swing.

JANUARY 24, 2018  by RACHEL QUEDNAU You know those games you usually find on the back of a cereal box or in a kids’ magazine that present you with two seemingly identical pictures and ask you to spot the six things that are different in each? Well, here’s a much easier version of that: What differences can…

Office space bordering Bryant Park in New York garner 63% higher rents than those one block away, thanks the economic value of urban parks. CreativeCommons image by Hazel Borys. RESEARCH 65 reasons why urbanism works Studies that quantify how urban places affect human, economic, and environmental wellness are essential to building the political will for…

by Howard Blackson – February 20, 2017 Times they are a’changing. We all hear that the New Urbanism has a gentrification/displacement perception problem in big city discussions. One of New Urbanism’s revolution was in shifting the 60s/70s planning by numbers approaches to city issues towards a design-oriented solutions. And, our anti-modernist stance in the ‘90s…

JULY 23, 2018  BY CONNOR NIELSEN 40 years ago this summer, voters in California approved Proposition 13, a law that initiated sweeping changes to the California property tax system and permanently re-shaped the dynamics of property ownership in the state. Prop 13 is known in California and beyond as the rule that protects low-income, elderly property owners…